For my “early” birthday, my wife gave me my first 3d printer. An Creality Ender 3 V2. It is a nice printer to start with.

My first print from the dog, which is on the default SD-Card went without any problems. The second print was alright and then it started. The filament was “hanging”.
Both of the “allen nuts” from the extruder were loose. This way the filament didn’t’ go to the nozzle and it was not working. Luckily I am a bit technical and I found the issue without any problems.

The second issue was one of the springs didn’t do anything and I had to level each time the bed.
Filament didn’t stick to the glass bed, although it was leveled correctly.

Changing things on the 3D printer

The first thing I had to do was buying new springs to level the bed in the correct way. One of the factory springs didn’t do anything!

Mounting the BLTouch is easy…. BUT….. the firmware depends on the mainboard you’re having. There are two versions and each version requires a different Firmware.
To see which version Mainboard is in the Ender, you will have to look at the Mainboard. Therefor you have to open a thing or two. In my case I had the V 4.2.2. and I put a sticker on the outside, so I don’t forget it.

The big question was: How to use the BLTouch?
Here is an instruction video about the BLTouch.

Although there is a nice drawing inside of the Ender for all your tools, not everything fits in it. That is why I printed holders.

To have to filament stick to the glass, I am using glue.
My son made a Glue Holder which you can download on Thingiverse.com

On thingiverse.com there are a lot of upgrades for a lot of 3D printers. Here is a filament roller for the Ender 3 V2 without any bearing. Pretty cool!

The cable management is very crappy and I found a nice chain which is working perfectly.

The Creality Ender 3 V2 is a good start for beginners who don’t know anything about 3D Printing (Like me.) Don’t expect to have an awesome 3D Printer which is working all the time. You have to spend a lot of time in the beginning, just to make sure your future prints will be great.

Here is the Amazon link for the Ender 3 V2 Upgrade Kit.
It contains of some springs and aluminum wheels.

Other Tips and Trick posts: 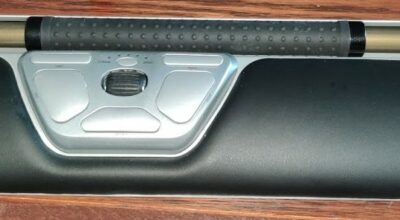